The Community Church of Pepperell is located at Three Townsend Street in the old center of Pepperell, Massachusetts. The architectural plans or building drawings no longer exist and the architect(s) are unknown.

In 1917, the Unitarian Church burned and the Unitarians, with insufficient funds and some practical thinking chose once again to join with the Congregational Church and agreed to be a Federated Church of Unitarians and Congregationalists. On September 16, 1919, the church was incorporated as the nondenominational Community Church Society under the guidance of the Reverend Francis E. Webster, an Episcopalian minister from Christ Church in Waltham, Massachusetts. The Community Church welcomes all denominations to worship and our motto, inscribed over the front portico, is “In Essentials, Unity, In Non-Essentials, Liberty, In all Things, Charity”. 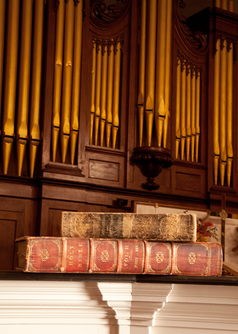 ​THE COMMUNITY CHURCH OF PEPPERELL

Just below the belfry, with a face on all four sides of the tower, there is a working tower clock, designed by George Stevens of Boston that was originally drum and cable driven but is now electrified. There is an iron bell hanging in the belfry. The Hook and Hastings pipe organ, which has been recently renovated to preserve its antiquity status in our community, rises majestically in the chancel with 629 pipes still in use today. The membership undertook an ambitious project with renovations to the sanctuary and an addition to the rear of the building in 1988. The addition increased our meeting space, added an office for the pastor, and provided a music room.

The Community Church welcomes all denominations
to worship.